The latest Divi scroll animation update adds a really cool motion scroll effects feature which allows you to apply advanced animations and transitions based on how a user is scrolling up and down on the page.

Scroll down and a module can be animated around or into the screen.

Scroll back up and that same module is animated in reverse back around or off the screen.

If you have a client who wants a “little extra pop, … or something” then this is what you need.

What are Divi scroll animation effects?

Divi already has animation options that can be added to Divi sections, rows, and modules, but these are only activated once as a user scrolls down the page.

As you can see in the 3 image modules below, the animation effect is directly related to how the page is being scrolled up or down.

There are 6 new motion scroll effects to choose from

You can animate any Divi section, row, or module with any combination of the 6 motion effects that are included in the motion effects option settings. Each motion effect than also has its own settings to control exactly how the animation works.

By combining effects you can create some stunning animation effects that will help bring any website to life.

The 6 scroll effect options include;

Each of the 6 scroll effects comes with their own settings which allow you to control exactly how and when the effect takes place. You can control the start, mid and end effect levels along with the timeline of the effects full animation based on the height of the browser viewport.

Options for the animation levels allow you to specify the power of each effect at 3 different points based on where the user is scrolling on the screen.

Options for the animation timeline allow you to specify the duration and timing of each effect at 3 different points based on where the user is scrolling on the screen.

How to add motion effects to a Divi module 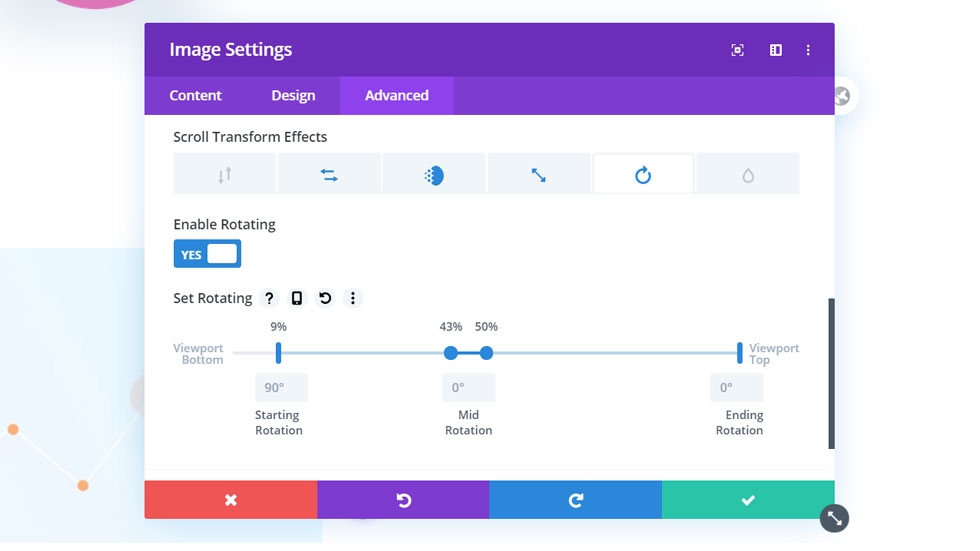 Adding the motion effects to your Divi sections, rows and modules is very quick and easy. Just toggle on the effects you want to add and use the visual slider to control exactly how the effect functions.

Follow these steps to add Divi scroll animation to your Divi sections, rows or modules;

This effect has been available from various plugins and other page builders and it has always been a popular effect that can be used to create some insanely creative animated websites. Having this feature built into Divi and having it also be so simple to implement adds a huge amount of creative freedom.

As the curator of amazing Divi websites on Divi Theme Examples, i’m really looking forward to seeing what the community will create with these new tools.

If you have used the new Divi motion effects options on your site, drop a link in the comments below and share your skills with the community.

Craig Longmuir is a a freelance web designer since 2006 and is the owner of DiviThemeExamples.com showcase gallery and DiviLayouts.com layout directory. A long-time Elegant Themes members and the original curator of Divi website examples, layouts, plugins and child themes since 2014. View full author profile & posts
Subscribe
1 Comment
Oldest
Newest Most Voted
Inline Feedbacks
View all comments

This site lists the best hand picked Divi websites & products from developers all over the world so you get to see only the very best.  Our junk filter is ON!
wpDiscuz